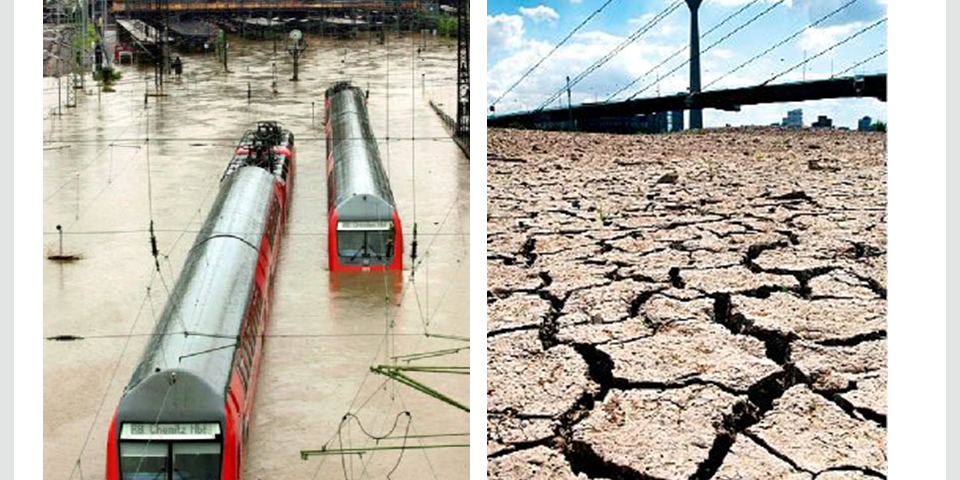 Around 100 government officials and climate change experts from the six EU Eastern Partnership countries together with the representatives from UNFCCC, the German Environmental Agency (UBA), the Institute for Environmental Protection of Poland and international experts from UNDP gathered online on November 18-19, 2020 for the second Regional Workshop on Adaptation Plans and Strategies organised by the EU4Climate initiative.

The webinar on the national adaptation strategies and plans meant for addressing the impact of climate change through medium and long-term National Adaptation Plan (NAP) and mainstreaming of climate risks into the sectoral planning processes for policymakers and technical officials in the six Eastern Partnership countries.

While all EaP countries presented the national state of play of the topic, understanding the key concepts of adaptation to climate change, and an overview of the NAP process, its objectives, and UNFCCC requirements, as well as the latest global developments, were shared to be utilised in the national plans (all presentations are available here).

“The NAP is a coherent, participatory and transparent national adaptation process informed and catalyzed by the international climate regime, a critical vehicle for absorption of climate finance for adaptation and assessing the progress on adaptation under PA”, said Olga Pilifosova, UNFCCC presenting the Importance of Adaptation and the NAP Process. According to her, NAP serves as a strategic investment plan for the country for adaptation and a basis for assessing progress in adaptation, as well as a means to document the process of formulating the NAP. 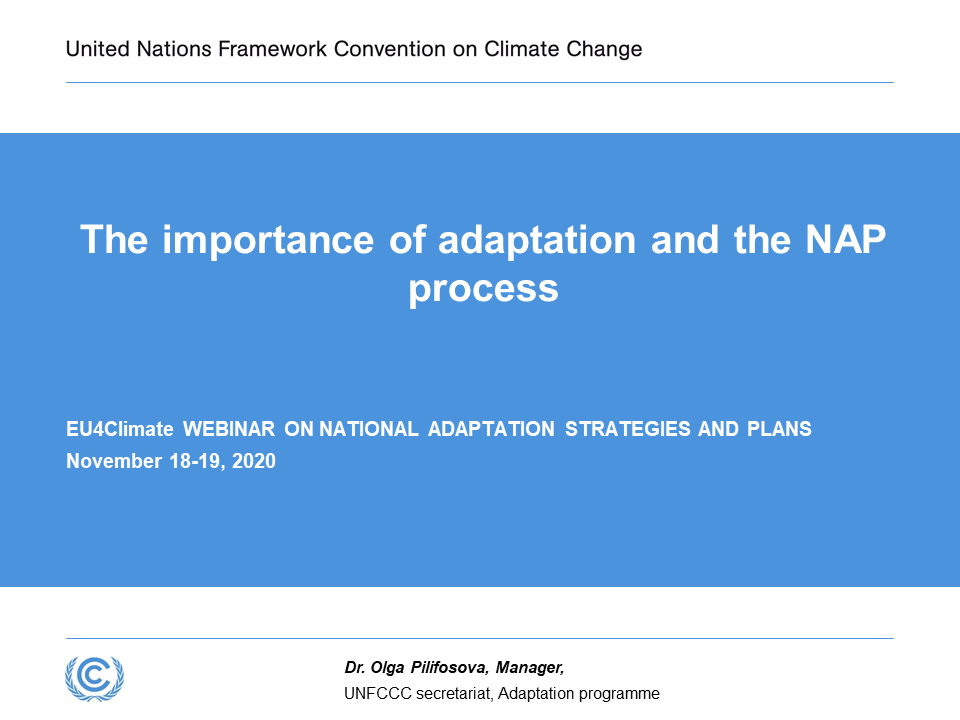 Providing knowledge and enabling, ensuring national policy framework alongside with the direct federal and international responsibility are the key elements of the national adaptation in Germany, according to Clemens Hasse from the German Environment Agency (UBA).

Presenting the Case of Germany on the National Adaptation Strategies and Plans Clemens Hasse noted that the lessons learned could be formulated as the following: “The future is and will be uncertain while adaptation is a regional and local, additionally successful local adaptation is tied on existing societal networks and initiatives”. 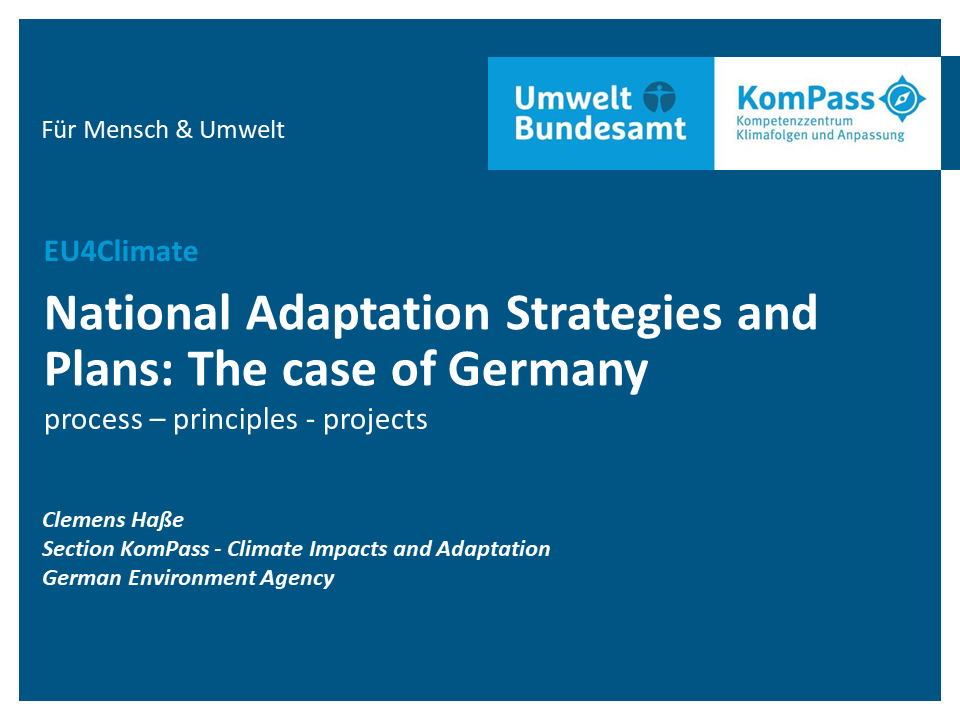 Maciej Sadowski from the Institute for Environmental Protection of Poland also shared EU experience about the Polish National Strategy for Adaptation to Climate Change. Based on climate change scenarios for Poland as well as adaptation instruments and preliminary cost estimation some key results were achieved in the country: blue-green infrastructure development, improving infrastructure and water management, improving cooperation between cities, and building resilience of society and economy. 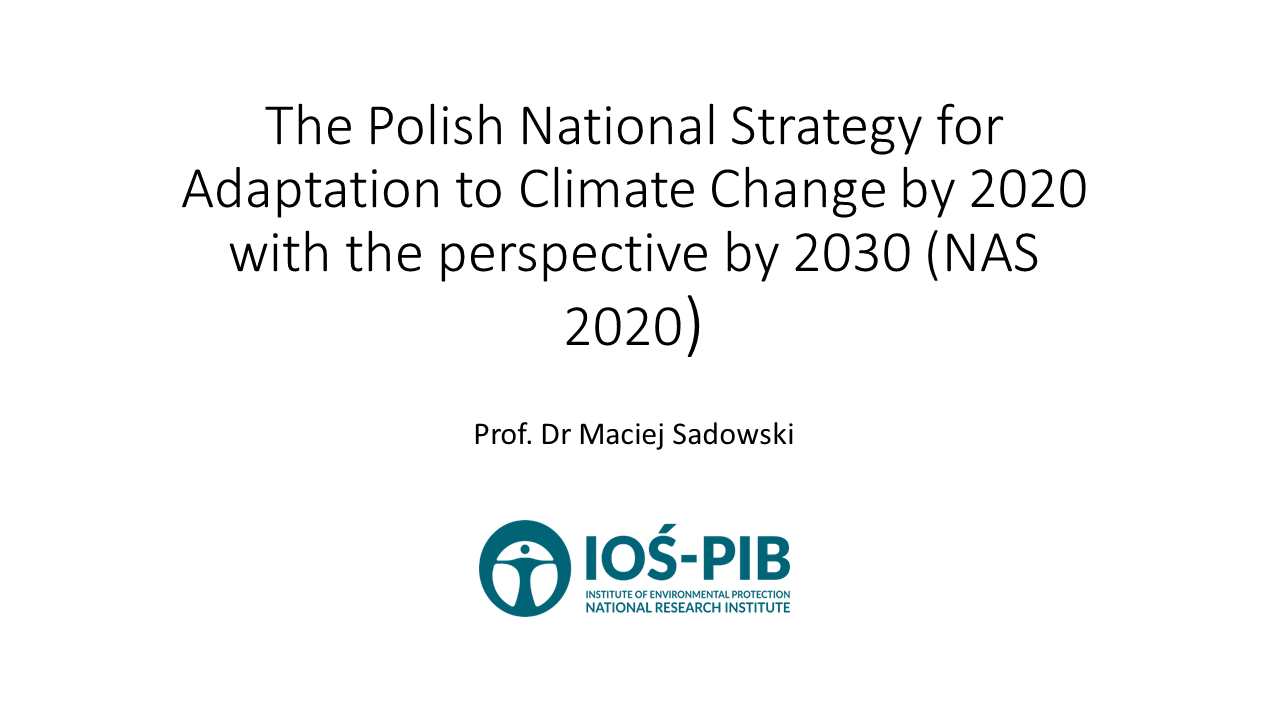 Further EU experience was presented by Markus Leitner from the Environment Agency Austria about the National Adaptation Policy Process and Implementation Activities. Sharing specifics of the Austrian experience Markus Leitner emphasised the characteristics of the development process that EaP countries should take care of during the NAP drafting stage: sectoral and iterative approach, development of the NAS and NAP jointly, collaboration with science with a broad stakeholder engagement. 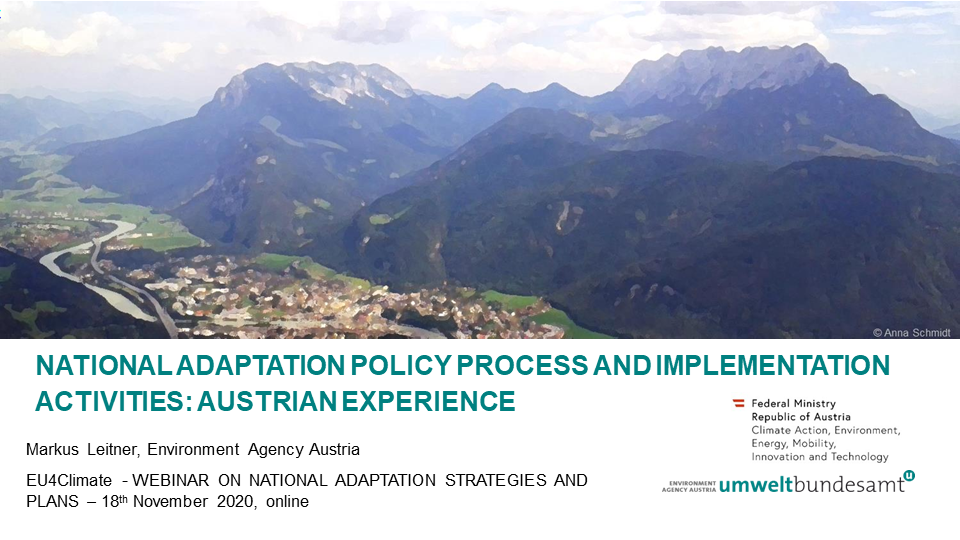 Existing capacity for developing the climate change adaptation policies as well as adaptation strategies and plans were assessed with an aim of translating the international guidance into the local context in the Eastern Partnership countries.