Experiences of national approaches to adaptation 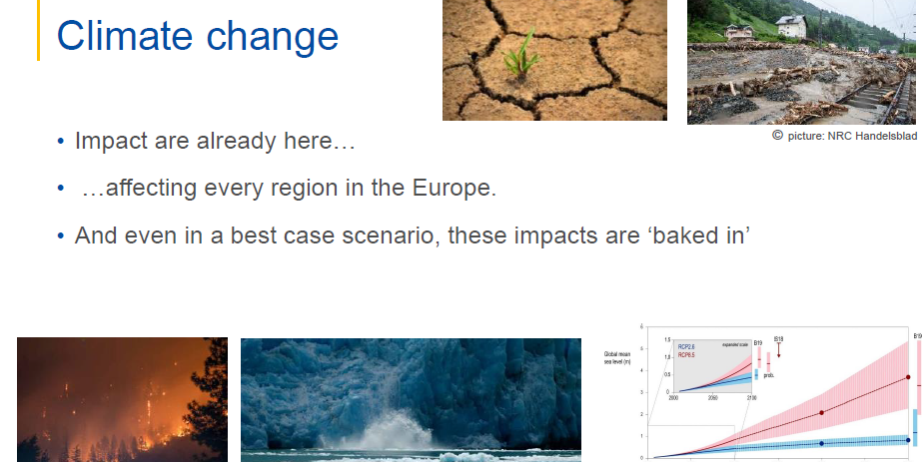 The third Regional Online Workshop on National Adaptation Strategies and Plans organised by the EU4Climate project and held on March 30-31, 2021 was to strengthen the ties between the EaP countries, as well as between them and the European Union (EU), in order to implement the Paris Agreement. The integration between Disaster Risk Reduction (DRR) and Climate Change Adaptation (CCA) and urban adaptation was also discussed with the goal of assisting all participants in their respective steps of the adaptation policy cycle.

The national state of play regarding adaptation plans before the new EU Adaptation Strategy showed the need for collaboration between the EU and its Eastern Partners, to make adaptation smarter, faster, systemic, and more international. One way to achieve this is through the integration between DRR and CCA.

Liviu Stirbat from DG CLIMA noted in his presentation “The importance of adaptation and the New EU Adaptation Strategy” that the new EU strategy urges the need of forging a climate-resilient Europe, together as a region not only as an EU matter recognizing the urgency of implementing immediate climate change adaptation measures due to the climate impacts that we are experiencing in every single region in Europe.

Three examples were presented. The EEA Report No 15/2017 suggests integrated national and regional platforms, multi-hazards mapping, long-term approaches, nature-based solutions, risk prevention financing, and systematic monitoring and evaluation. Transnational experiences from PLANALP and EUSALP give an insight into the practice of integrated cooperation.

While Wolgang Lexer (EEA) presented “Joining forces towards climate-resilience of the European alps- the experience of the alpine convention and the alpine climate action plan 2.0”, “Transnational experience from the European Alps – EUSALP and PLANALP” was shared by Kilian Heil- BMLRT (Austria). The Alpine Climate target System 2050 shows how transboundary adaptation planning can be shaped. Subsequently, participants discussed the transferability of these examples in three breakout groups.

“How web portals can support knowledge exchange (European examples at different levels: EU: Climate-ADAPT; Transnational: CAPA; national: national portals) was presented by Markus Leitner (EAA). WeAdapt, as a global adaptation knowledge platform, ClimateADAPT as the European one-stop-shop, CAPA as a macro-regional tool covering the Alpine Space, and the EU Climate and Health Observatory as an example of a cross-sectoral platform.

Shifting the focus to urban adaptation, ) presented how the city of Cascais (Portugal) uses its membership in the Covenant of Mayors network to develop concrete adaptation measures. “The main climate-related hazards in Cascais are coastal erosion, heatwaves, and the increase of fires and storms”, explained Joao Dinis.

“Climate change adaptation and disaster risk reduction in Europe” was introduced by Sergio Castellari (EEA) with the main global and European policies on CCA and DRR, knowledge base on whether and climate-related hazards and their impacts. It develops 18 cases in Europe and good practice examples of linking CCA and DRR as well as its opportunities and benefits.

What the EEA Urban Adaptation Report of 2020 perceives as the most relevant barriers and success factors were introduced in the presentation “Urban adaptation in Europe: how cities and towns respond to climate change?” by Aleksandra Kaźmierczak (EEA). Mrs. Kaźmierczak stressed the urgent need for cities and towns to adapt to climate change highlighting that some of the main climate risks in Europe are heat and the increasing existence of heatwaves all over the territory as well as pluvial floods.

“Implementation of Urban Adaptation – Examples from Europe presented” by Vasileios Latinos (ICLEI Europe) was about the work of ICLEI currently does. Some of the examples of urban adaptation were referring to Paris (France), the recovery of the dunes in Almada (Portugal), the marine biodiversity actions in Cannes (France), the water retention systems, and the increased green spaces and blue infrastructure in Warsaw (Poland), etc.

The online workshop continued with an interactive exercise to assess the most relevant urban climate risks and how they change in the future. It was well-attended by 133 participants, including 36 ministerial representatives from EaP countries, the European Commission, and international experts. UNDP and the EC also demonstrated that they are committed to support countries to advance their adaptation planning capacities and development of NAPs, ensuring linkages with Disaster Risk Reductions and management as well as supporting urban adaptation.

All presentations are available here.

Details about the workshop activities and information related to Belarus are available here.