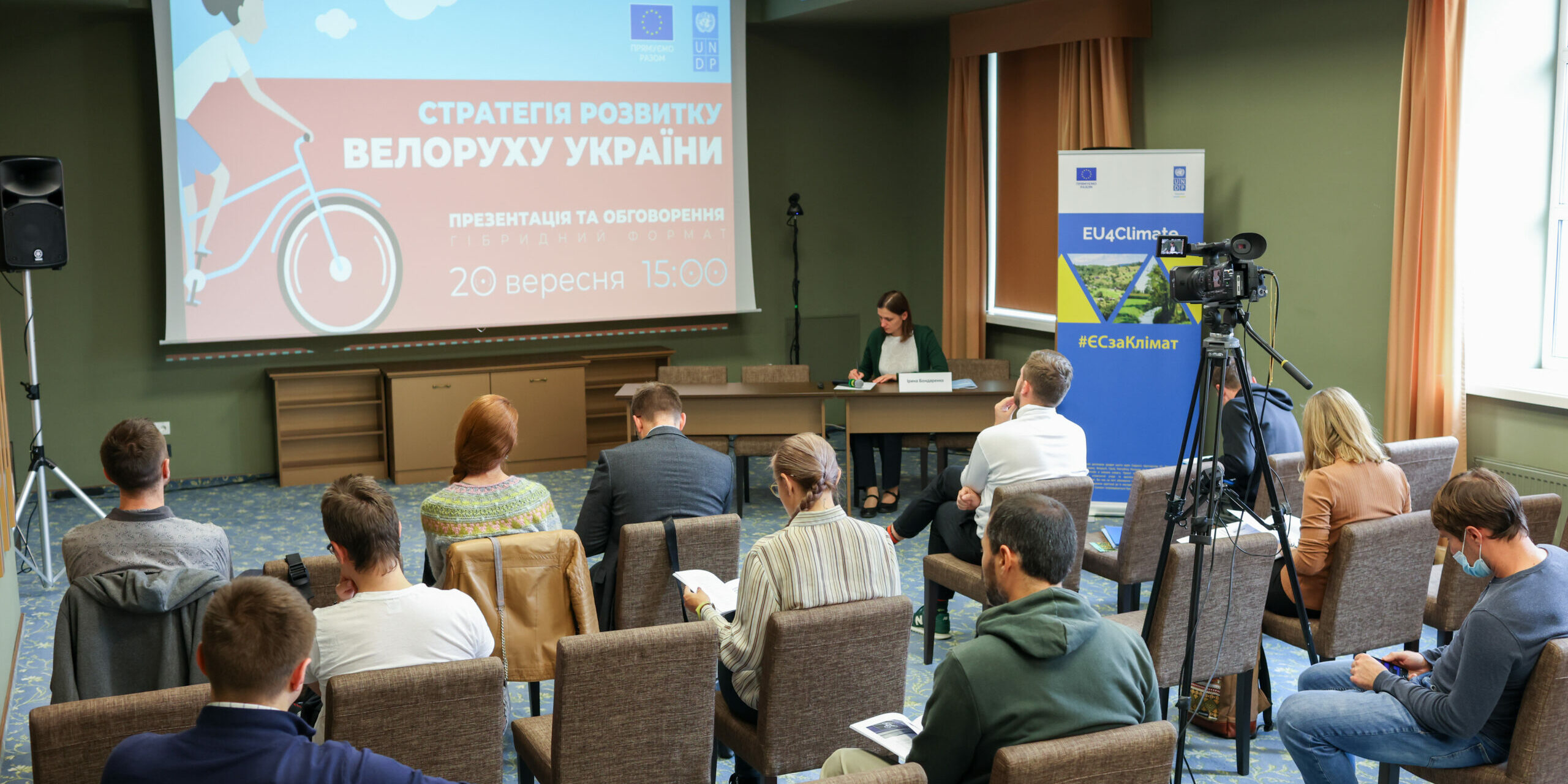 The EU4Climate Project supporting the development of the National Cycling Strategy that incorporates policy recommendations from the Micromobility White Paper.

KYIV, Ukraine, 24 September 2021 – EU Sustainable Mobility Week saw the achievement of a key milestone in Ukraine on 20 September 2021, with the presentation of the draft National Cycling Strategy at an online and offline event. The presentation brought together over 50 participants from local authorities, civil society organizations, and activists from Kyiv, Lviv, Vinnytsia, Odesa, Zhytomyr, Kryviy Rih and other cities of Ukraine.

The sustainability of the transport sector is one of the key themes mainstreamed across several SDGs and targets. The undisputed impact of transport on the climate and the wellbeing of the people was recognized under the United Nations Framework Convention on Climate Change (UNFCCC), stating that transport will play a significant role in achieving the targets set forth by the Paris Agreement.

In Ukraine, the National Transport Strategy notes that 90-95 percent of air pollution in the cities is created by road transport, with only 4 percent being accounted for by aircraft, trains, water transport and emissions from enterprises. Most of the country’s population (approximately 69 percent) lives in the cities, which entails the solution should focus on the development of safe, comfortable and environmentally friendly public transport, and micromobility, which would promote reducing greenhouse gas emissions (GHG) and improve public health.

The EU-funded project EU4Climate implemented by UNDP, supports the development and implementation of climate-related policies by Eastern European Countries, contributing to a decrease of GHG emission, climate-resilient development, and the fulfillment of these countries’ commitments to the Paris Agreement on Climate Change. The project is also supporting the development of Ukraine’s National Cycling Strategy.

Daniel Jaques, Policy Officer for Transport & Infrastructure in the Support Group for Ukraine, Directorate-General for Neighbourhood and Enlargement negotiations, noted in his welcoming remarks during the draft strategy’s presentation that “Ensuring that walking and cycling are safe, accessible and attractive reduces the number of car trips, especially in the cities.”

“Combating traffic congestion is very important, and we have seen that the improvement of cycling leads to reduction of car traffic by 45 percent and faster public transport in cities like Copenhagen. Due to the range of benefits that can be generated, cycling, therefore, contributes to fulfilling objectives in a number of key EU policy areas, namely reducing congestion of transport and mobility, low carbon development, reducing air pollution, and boosting industrial competitiveness and economic growth, local development and cohesion, and sustainable tourism.

“The European Green Deal aims to achieve a 90 percent reduction in GHG emissions from transport so that the EU becomes a climate-neutral economy by 2050. In this context, we have the target of doubling cycling infrastructure in the EU, we have a commitment to improving urban mobility, and so I welcome the development and coming implementation of the National Cycling Strategy and respective Action Plan in Ukraine.”

The EU4Climate Project prioritizes contributions to environmental sustainability through improved sectoral policies and mainstreaming climate change mitigation and adaptation into development sectors. In Ukraine, the focus is on improving governance systems, and promoting sustainable urban mobility and developing low-emission transport.

Manal Fouani, UNDP Deputy Resident Representative to Ukraine, in her welcome remarks at the presentation that the number of cyclists in Kyiv during quarantine has increased by more than 2.5 times compared to 2019, according to U-Cycle.

“Such a change is a positive one for the future of public or mobile transport and its respective infrastructure, and it requires further support from the international community and the Government of Ukraine,” Fouani said.

Discussion of the draft strategy and its elements focused on many practical aspects to be considered in its further development, namely: improving safety for cyclists, the development of a national network of bicycle routes, using rail and public transit with bicycles, the system of bike parking lots and areas, data collection and analytics for developing cycling, information campaigns on bicycle use, and finance mechanisms for developing cycling at the national and local levels.

Anna Yurchenko, the Deputy Minister of the Infrastructure of Ukraine, noted her support for a joint effort to develop a comprehensive document that will unite all actors interested in further developing Ukraine’s cycling culture and infrastructure.

“I’d like to thank this project, which unites us and enables us to create a platform where representatives of the ministries, local communities and civil society organizations can have a fruitful discussion, and I’d like to thank all the parties who joined in this process,” said Yurchenko.

Event participants, experts and other stakeholders will review the draft National Cycling Strategy until 20 October 2021, and provide their comments, suggestions and edits to the document via the Comments form. Following the review stage, the document will be submitted to the Ministry of Infrastructure, together with the Action Plan, for further development, approval and implementation in the future.

EU4Climate helps governments in the six EU Eastern Partner countries (Armenia, Azerbaijan, Belarus, Georgia, the Republic of Moldova and Ukraine) to take action against climate change and towards a low-emissions and climate-resilient economy. Funded by the European Union (EU) and implemented by UNDP, EU4Climate supports countries in implementing the Paris Agreement and improving climate policies and legislation with the ambition of limiting the impact of climate change on citizens’ lives and making them more resilient to it.