Moldova has reduced greenhouse gas emissions by approx. 69% compared to 1990 and has set ambitious targets for 2030 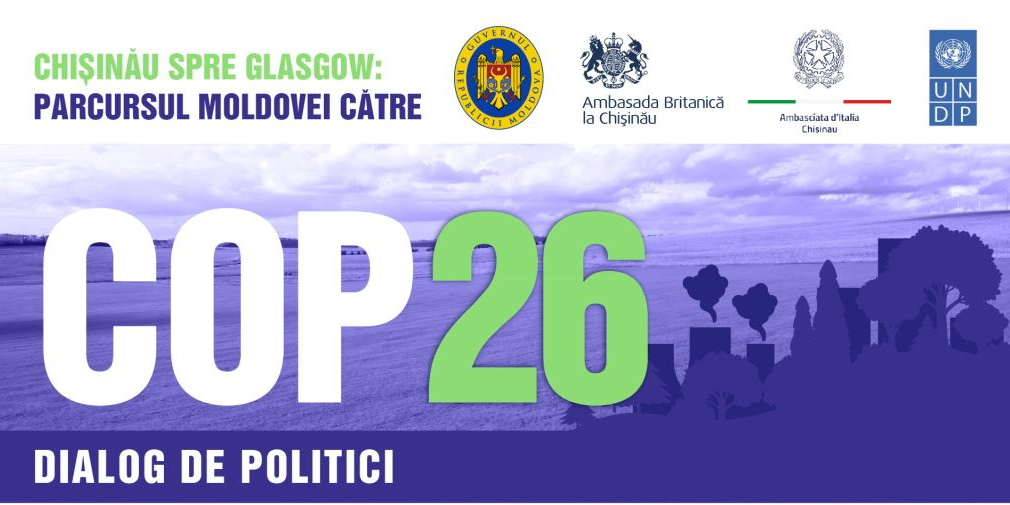 The Republic of Moldova has reduced its greenhouse gas (GHG) emissions by approximately 69% compared to 1990, exceeding by 4% its commitments under the Paris Agreement, included as intermediate targets for 2020. The announcement was made by the Ministry of Agriculture, Regional Development and Environment (MADRM) at the policy dialogue “Chisinau to Glasgow: Moldova’s roadmap to COP26”, conducted online on 20 May by the United Nations Development Programme (UNDP), in partnership with the British and Italian Embassies in Chisinau.

The Conference of the Parties, known as the COP, is the decision-making body responsible for monitoring the implementation of the United Nations Framework Convention on Climate Change (UNFCCC). Since the 2015 Paris Agreement, the annual COPs have become the most relevant and representative climate forums, providing a global barometer of progress towards meeting the objectives of the Paris Agreement. COP26 will take place during 1-12 November 2021 in Glasgow and will be led by the United Kingdom in partnership with Italy. The United Kingdom and the UN advocate that much of the work to prepare states for COP26 to be carried out before Glasgow, thus paving the way for a successful COP, in which international agreements and actions are guaranteed and not just discussed. To this end, Italy will host a pre-COP26 in Milan from 30 September – 2 October 2021

“The UK, together with our partners Italy, will bring 197 parties [196 countries and the EU] together for twelve days of talks in Glasgow. It must be the moment that every country, and every part of society, embraces its responsibility to protect our planet.  In the run-up to COP26, the UK is working with every nation to reach an agreement on how to tackle climate change. We are encouraged by Moldova’s ambitious commitments and support them in delivering their climate goals,” said David Moran, UK Government’s COP26 Regional Ambassador.

According to MADRM estimates, the major reductions in GHG emissions were recorded in agriculture, exceeding by 26% the intermediate targets for 2020, and the electricity and heat production sector, by 19%. However, there are significant increases in GHGs compared to pre-established targets for 2020, in the residential sector – by 49%, transport – by 37%, and industrial processes – by 39%.

“Our efforts should be channeled to actions that will contribute to achieving the climate ambition of the Republic of Moldova, expressed in the updated National Determined Contribution. This will bring us closer to the goals of the Paris Agreement to decarbonize the economy and improve resilience to climate change. The low-emission development approach will enable the Republic of Moldova to achieve the Sustainable Development Goals and international climate commitments. The transition to a low-carbon, climate-resilient economy requires significant financial investment and, in this context, we rely on the support of external partners in the development and implementation of climate policies,” said Ion Perju, Minister of Agriculture, Regional Development and Environment

The Paris Agreement stipulates that each country shall develop and submit National Determined Contributions (NDCs). The NDCs plan to mitigate GHG (greenhouse gas) emissions and adapt to climate change. Even though NDCs have articulated national efforts on climate change, they are not sufficient to achieve global long-term goals. Future NDCs – those in place since 2020 and updated every 5 years – shall significantly increase ambition and direct all countries towards sustainable low-emission development.

In its updated NDC, Moldova has committed to unconditionally reduce GHG emissions by 70% by 2030 compared to 1990, to contribute to the implementation of the Paris Agreement. This is the most important climate agreement, which provides for global warming to be kept well below 2 degrees Celsius compared to the pre-industrial period.

The Republic of Moldova is one of the most vulnerable countries to climate change, even though it has a minor contribution to global greenhouse gas emissions. The annual losses caused by climate change amount to 2.13% of the Gross Domestic Product, and in the next decade up to 40 thousand deaths per year could be caused by extreme temperatures.