Georgians see climate change as a top-three challenge for humanity 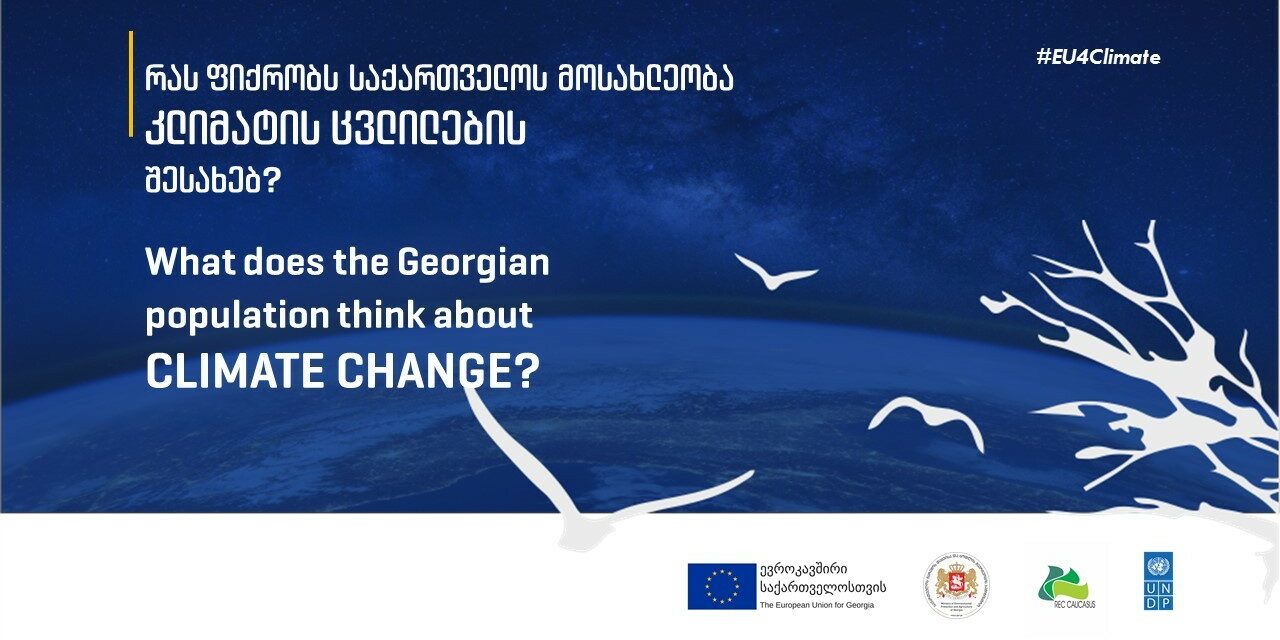 TBILISI. 12 February 2021 – Virtually all Georgians understand what climate change is and the vast majority see it as a direct and immediate threat to lives and livelihoods in Georgia. But while a large share agrees that reducing the risks will require each individual to adopt a “greener” lifestyle, only a few are taking action. These are the findings of “What the Georgian population knows about climate change,” a new report released today by the European Union (EU) and the United Nations Development Programme (UNDP).

The research presents the results of the first nationwide opinion poll conducted in Georgia on public awareness about climate change. Carried out by the Regional Environmental Center for the Caucasus in August-September 2020, the research is based on face-to-face interviews with 1,100 people from all regions.

Among the most striking findings:

“The EU is a global leader in the fight against climate change, but we will not succeed in this common global fight without broad public support and personal engagement,” said Alexandre Darras, Team Leader on Connectivity, Energy, Environment & Climate Change at the EU Delegation to Georgia. “This first-ever national survey of climate awareness is an excellent tool to assess the position of the Georgian population with regard to climate change and understand what are the expectations, and the role people are ready to play.”

Asked to rank climate change among the different threats facing humanity, Georgians put it in a high third place, after poverty and infectious diseases. Given the country’s current focus on the COVID pandemic, this was seen as a remarkable finding. It was echoed recently in the Peoples’ Climate Vote, a global opinion poll with 1.2 million participants conducted by UNDP in 50 countries through online gaming networks. In this survey, 68 percent of Georgians agreed with the idea that climate change is a “global emergency.”

The EU-UNDP study showed that Georgians have almost zero awareness of specific policy commitments or reporting requirements related to climate change (barely 10 percent had ever heard of “nationally defined contributions,” a crucial emission-reduction commitment). Even those who said they had read something recently about climate change had a hard time remembering what it said. However, Georgians did have a very clear sense of the impact climate change might have on their lives, with large shares directly attributing floods, drought, hail, landslides, torrential rain and other extreme weather events to global warming.

Georgians were divided almost evenly between the 45 percent who thought there was still time to halt climate change and the 49 percent who believed it was already too late. That said, a large majority of respondents remained convinced that individual behaviour makes a difference in combatting the impact of climate change: 65 percent when asked about other people and 57 percent when talking about themselves.

But this – what the researchers described as Georgians’ “high sense of social responsibility” – did not translate into climate-friendly behaviours or actions. On the contrary, only small shares of the public said they considered the environmental impact when buying cars or appliances or choosing how to heat their homes.

How to explain this disconnect? It seems that cash-strapped Georgians focus only on the cheapest options.

“The research makes us optimistic,” said UNDP Head Louisa Vinton. “Georgians understand that climate change poses immediate threats to lives and livelihoods, and they recognize that everyone has a role to play in saving the planet. To transform this awareness into action, we need to devise proper incentives to show that environmentally-friendly options can also save people money. That is how we solve this equation.”

The new study was conducted as part of the EU-funded EU4Climate programme that UNDP implements in the six Eastern Partnership countries: Armenia, Azerbaijan, Belarus, Georgia, Moldova and Ukraine. It assists countries in mitigating climate change and adapting to its effects by introducing climate-sensitive policies and reducing greenhouse gas emissions. The four-year EUR 8.8 million programme continues until end-2022.