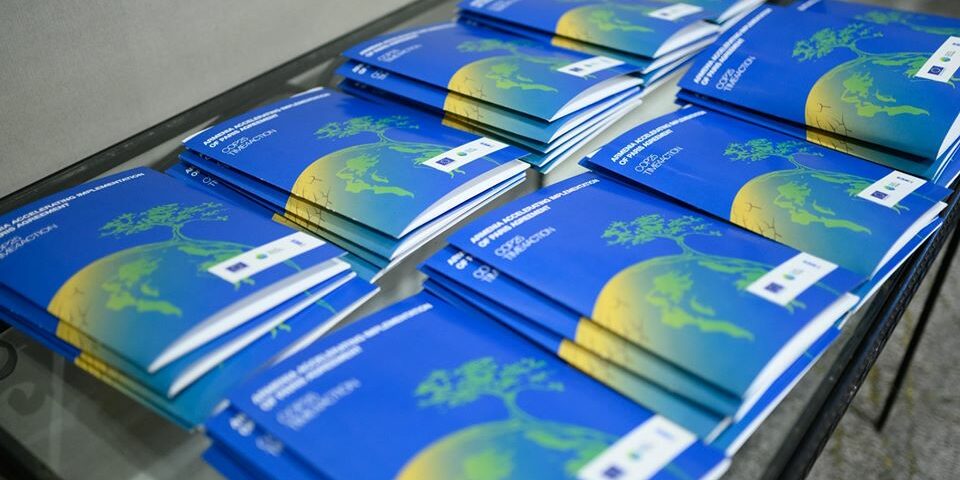 YEREVAN. 30 December 2019 – Nowadays climate change has emerged as one of the most alarming issues around the world. The negative impacts of climate change are already evident in Armenia in the forms of frequent heat waves, increase of extreme hydro-meteorological events, shortage of irrigation and drinking water resources, increase of forest fires, etc.

On 20 December, with the purpose of discussing these issues and the outcomes of 25th Conference of Parties to the UN Framework Convention on Climate Change (COP25), the Ministry of Environment of the Republic of Armenia and the UNDP in Armenia co-organized a round-table discussion in the framework of European Union funded “EU4Climate” regional programme. In parallel, “Time4Action” Media Contest aiming to promote media engagement was announced on 29 November.

The theme of round-table discussion was Armenia’s position for meeting country’s commitments under Paris Agreement of the UN Framework Convention on Climate Change (UNFCCC) in the light of the COP25, that took place on 2-13 (15) December in Madrid.

The discussion focused on Armenia’s progress towards mitigation of climate change in relation to the planned harmonization of legislation and policies as EaP country and the beneficiary of EU4Climate programme. In addition, the role of partnership between public and private sectors, NGOs and other organizations in climate action was also discussed.

In her speech, the Head of Political, Press and Information Section of the European Union Delegation to Armenia Ekaterina Dorodnova stressed the European Union’s strong commitment towards implementation of Paris Agreement and increased ambition targets, at the same mentioned European Union’s disappointment related to the outcomes of talks and negotiations during COP25.

“The European Union supports Armenia in mitigation of climate change impacts by a range of initiatives including EU4Climate regional programme and in accordance with environmental provisions set by Comprehensive and Enhanced Partnership Agreement (CEPA). The EU4Climate programme will assist Armenia to update its Nationally Determined Contribution (NDC) by the end of this year to achieve ecosystem neutral GHG emissions in 2050”, said Ekaterina Dorodnova.

The Minister of Environment Erik Grigoryan, presented Armenia’s continuous efforts aimed at implementation of country’s commitments under the UNFCCC and the progress of implementation of Paris Agreement in the light of COP25. Mr. Grigoryan briefed on the results of discussions held within the high-level segment meetings in Madrid – World Climate Summit and Sustainable Innovation Forum 2019, where Armenia introduced its newly developed innovative tool for raising direct financial resources by developing countries for mitigation and adaption climate change impacts. During the high level meeting on “Highlighting the role of forests in the context of climate change” Armenia presented country’s forest policy fundamentals and ambitious targets towards reforestation and action on planting 10 million trees in 2020.

“As far as climate change impacts are not limited to the environment only, but are felt also in agriculture, transport, urban planning, and energy sectors, stronger cooperation between these sectors is needed for adapting their policy guidelines to the current challenges of climate change”, concluded Erik Grigoryan.

The Minister of Economy Tigran Khachatryan, emphasized the need for businesses to remain true to adapting their production processes towards lower carbon emissions and less negative impacts on the environment.

“Within all polices of economic sector we prioritize two major aspects in terms of mitigation of climate change impacts and adaption to new reality. The first is to change the way of thinking in order to be able to change a behavior and the second is to develop and harmonize joint development agenda with other sectors”.

The Deputy Minister of the Territorial Administration and Infrastructure, Hakob Vardanyan mentioned that the use of renewable technologies is a priority in energy sector. Mr. Vardanyan spoke about Armenia’s recent achievements towards results of energy sector policy on market intake of solar energy and importance of promotion of energy efficiency in line with rising climate change impacts.

Welcoming the participants of the round-table discussion, the UNDP Resident Representative in Armenia Mr. Dmitry Mariyasin highlighted the continuous cooperation between the UNDP and the Government of Armenia towards country’s ambitious climate action. As a brilliant example of regional cooperation, Mr. Mariyasin emphasized the role and uniqueness of “EU4Climate” EU-UNDP programme in terms of Programme’s focus on mainstreaming climate change issues into sectoral policies.

“Despite the global progress made against climate change impacts in a number of areas, it remains a major challenge for humanity causing negative impacts on economic and social sectors. The UNDP remains faithful in its promise of  supporting Armenia for implementing its ambitious climate agenda in a number of areas, including renewable energy, health, gender, women empowerment”, said Mr. Mariyasin.

Afterwards, Mr. Andrea Baggioli, the International Aid/Cooperation Officer of European Union in Armenia delivered a presentation on broader support Armenia receives from the EU for environmental protection, including initiatives for improving sustainable management of water and other key natural resources, developing sounder environmental governance, supporting renewable energy and energy efficiency projects through technical assistance, different financial instruments, as well as on how climate change mitigation and adaptation actions enhancement and environmental awareness raising are addressed within the EU4Climate programme.

The UNDP Climate Change Programme Coordinator Diana Harutyunyan spoke about Armenia’s current status in adhering to the transparency framework regulations under the Paris Agreement, referring to the mechanisms of addressing transparency component through introducing monitoring, reporting and verification (MRV) system under the “EU4Climate” programme.

Subsequently, the representatives from the state agencies, Yerevan Municipality, NGOs, financial institutions and private sector presented their activities implemented for contributing to climate action. The active discussions and exchange of ideas between participants laid a fruitful ground for new ways of cooperation and a number of cross-sectoral gaps were identified for further review.

Among other attendees to the event were embassies of foreign states in Armenia, representatives from the RA ministries, interested state agencies, Yerevan Municipality, international development partners, and UN agencies.

Following the round-table discussion, the award ceremony of “Time4Action” media contest, as part of “COP25 – Time4Action” awareness raising event was held on 27 December at UN House in Armenia.

The announcement of media contest was made to 110 local media outlets (including regional ones) on 29 November, 2019 and was widely shared on UNDP Armenia, UNDP Climate Change programme and UN Armenia Facebook channels.

The thematic focus of the contest was to highlight Armenia’s position for meeting country’s commitments under UNFCCC and Paris Agreement in the light of COP25. The participants of the contest were asked to follow COP25 and prepare media products on the climate change issues discussed during the Conference, emphasizing actions taken by Armenia for mitigation of negative consequences of climate change in relation to the planned harmonization of legislation and policies as EaP country and the beneficiary of EU4Climate programme.

In order to ensure more comprehensive and thematic reporting these media outlets were also invited to attend and cover “COP25 – Time4Action: Armenia Accelerating Implementation of Paris Agreement” round table discussion held on 20 December 2019.

“Time4Action” media contest featured both print and online articles, as well as broadcasts and video content. From about 65 submitted media products 12 shortlisted representatives were invited to attend the award ceremony.

The Jury composed of representatives from the EU Delegation to Armenia, the Ministry of Environment and the UNDP in Armenia selected finalists based on a co-defined evaluation criteria.

At the opening of award ceremony the Deputy Minister of Environment, Irina Ghaplanyan, the Head of Cooperation of the European Union in Armenia Gonzalo Serrano, the UNDP Resident Representative in Armenia Dmitry Mariyasin, delivered congratulatory remarks and handed prizes to the winners in three nominations: “Comprehensive and engaging reporting”, “Evidence based, balanced reporting” and  “Complete and thematically focused reporting” to journalists respectively from “Hetq”, “Respublica Armenia” and “NEWS.am” media outlets.

The event was also attended by the International Aid/Cooperation Officer of the EU Delegation to Armenia Andrea Baggioli, the UNDP Climate Change Programme Coordinator Diana Harutyunyan, Jury members, representatives from the Ministry of Environment, UNDP in Armenia and media representatives.

Overall, the “COP25 – Time4Action” awareness raising event was aimed at bringing together the leaders from highest levels and diverse coalitions across all sectors of society to discuss Armenia’s progress made in addressing climate change impacts, to speak about the challenges felt in various sectors, as well as to enhance commitment and cooperation at local and international level.

The initiative of “Time4Action” media contest encouraged media representatives to voice about climate change as one of the most alarming concerns of our times and raised awareness of public groups less familiar with climate change issues in Armenia, promoting public demand from decision makers towards the actions needed for mitigating and adapting to the impacts of climate change at local level.

EU4Climate programme helps governments in the six EU Eastern Partner countries Armenia, Azerbaijan, Belarus, Georgia, the Republic of Moldova and Ukraine to take action against climate change. It supports countries in implementing the Paris Climate Agreement and improving climate policies and legislation. Its ambition is to limit climate change impact on citizens’ lives and make them more resilient to it.