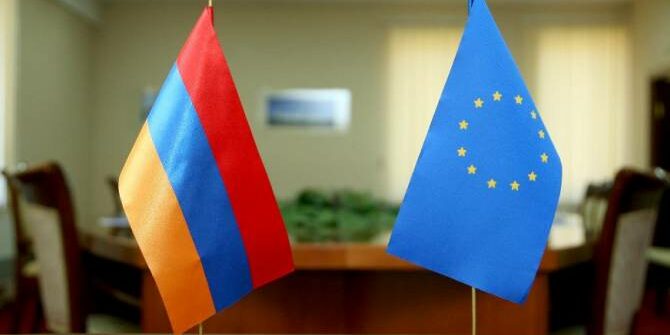 YEREVAN. 30 April 2019 – In 2019 the European Union (EU) launched a new regional initiative – EU4Climate, to support the six Eastern Partnership countries (Armenia, Azerbaijan, Belarus, Georgia, Moldova, and Ukraine) to develop and implement climate-related policies based on the countries’ commitments under the Paris Agreement on Climate Change, the Association and Partnership Agreements with the EU, the Eastern Partnership policy initiative “20 Deliverables for 2020,” and the UN 2030 Agenda for Sustainable Development. The EU4Climate project, with a total budget of EUR 8.8 million, will help the six countries to develop and implement forward-looking climate policies.
Today, the European Union, together with the project implementing partner – the United Nations Development Programme (UNDP), representatives of the Government of Armenia, and various stakeholder groups got together at the project inception workshop to discuss priorities and next steps for implementation of the EU4Climate project.
With overall funding of EUR 857,000 for Armenia for 2019-2022, the project will support the development of the implementation plan and roadmap for nationally determined contributions (NDCs) to the Paris Agreement in Armenia. It will also contribute to the alignment with the EU climate legislation, mainstreaming climate change in policy sectors and contributing to Armenia’s low carbon development future.
“EU4Climate project will support the objectives of the Government of Armenia to develop their updated and strengthened Nationally Determined Contributions (NDCs) by the end of this year – aiming at a greater ambition. EU4Climate will feature among key international support mechanisms in the context of the NDC Partnership mapping exercise (joined by Armenia last year: https://ndcpartnership.org/). The EU aims, with the launch of this new programme, to ensure that partner countries already affected by climate change are capable of taking the necessary measures to adapt,” said Gonzalo Serrano, Head of Cooperation Section of the EU Delegation to Armenia.
“Armenia is actively addressing climate change issues and has ratified the Paris Agreement. The government has developed a national climate change policy, resulting in the adoption of a concept for the implementation of state climate policy by 2030, the development and approval of national adaptation strategy and plan, and other measures in line with resilient and sustainable development of the country. The international partners’ support, notably, the EU, UNDP and other development partners, has played a crucial role in these achievements. We welcome the launch of the EU4Climate project, which will build on what has been achieved to date in climate policy, but which will also address the emerging need to develop a climate change strategy and implementation roadmap for Armenia,” said Irina Ghaplanyan, First Deputy Minister of Nature Protection of Armenia.
“As the largest implementer of climate action in the UN system, UNDP works with countries to turn their climate goals into action. Based on the lessons learnt and successful experience of the EU-funded ClimaEast project, UNDP will help identify the climate change mitigation and adaptation approaches to better equip partners, cut greenhouse gas emissions and mitigate climate change effects in Armenia,” said Dmitry Mariyasin, UNDP Resident Representative in Armenia.
EU4Climate is based on experience gained during previous and ongoing projects, partnerships and initiatives, as well as on EU and UNDP expertise at both the regional and country levels in climate policy development and governance.
***

The Member States of the European Union have decided to link together their know-how, resources and destinies. Together, they have built a zone of stability, democracy and sustainable development whilst maintaining cultural diversity, tolerance and individual freedoms. The European Union is committed to sharing its achievements and its values with countries and peoples beyond its borders.
***
UNDP partners with people at all levels of society to help build nations that can withstand crisis, and drive and sustain the kind of growth that improves the quality of life for everyone. On the ground in nearly 170 countries and territories, we offer global perspective and local insight to help empower lives and build resilient nations. UNDP in Armenia was established in March 1993 and supports the government in meeting its development priorities and the Sustainable Development Goals.