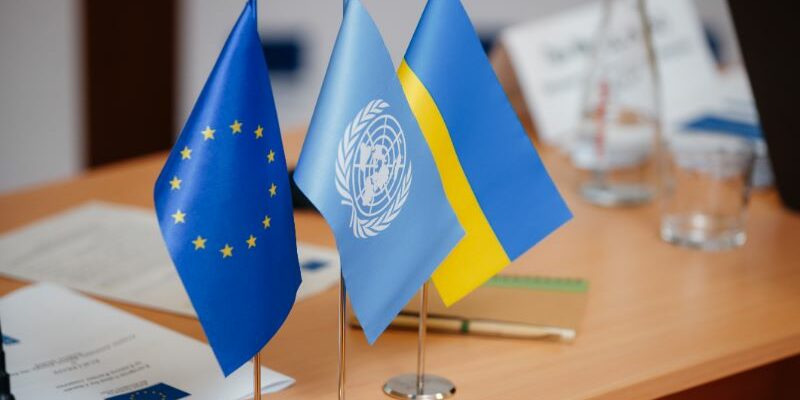 Given the direct and existential threat of the climate change, the European Union launched in 2019 a new regional initiative called EU4Climate, aiming to support the six Eastern Partnership countries (Armenia, Azerbaijan, Belarus, Georgia, Republic of Moldova, and Ukraine) to develop and implement climate-related policies based on the countries’ commitments under the Paris Agreement on Climate Change, the Association and Partnership Agreements with the EU, the Eastern Partnership policy initiative “20 Deliverables for 2020,” (in particular the climate-related Deliverables 15 and 16) and the UN 2030 Agenda for Sustainable Development (in particular SDG 13 on “Climate Action”). The project is funded by the European Union and implemented by the United Nations Development Programme.
The National Launch offered an opportunity for government officials and the representatives of various stakeholder groups to discuss priorities and next steps for EU4Climate implementation in Ukraine until 2022. With overall funding of EUR 1.13 million for Ukraine over the period of 2019-2022, the project will support the development of the implementation plan and roadmap for nationally determined contribution (NDC) to the Paris Agreement, which embody the country efforts to reduce national emissions and adapt to the impacts of climate change, as well as national and sector adaptation plan for Ukraine. It will also contribute to the alignment with the EU climate legislation, mainstreaming climate in policy sectors and the implementation of Ukraine’s Low Emissions Development Strategy adopted in 2018.
“The EU has more than two decades of experience in designing, implementing and supporting climate policies at home and abroad. In the EU, we have already decoupled our emissions from economic growth: EU GHG emissions have fallen by 22 percent in 1990-2017, while total EU GDP has grown by 58 percent. Technological changes and innovations have delivered a majority of these emissions reductions. The EU-Ukraine Association Agreement includes energy transition and decarbonisation policies, which should allow Ukraine to follow the path towards a low greenhouse gas emissions economy,” said Johannes BAUR, Head of Section at the EU Delegation to Ukraine.
“As the largest implementer of climate action in the UN System, UNDP works with countries to turn their climate goals into action. Based upon the previous successful experience and lessons from the EU-funded ClimaEast project, UNDP will help identify the climate change mitigation and adaptation approaches to better equip partners, cut greenhouse-gas emissions and mitigate climate change effects within EU4Climate project implementation in Ukraine,” said Armen GRIGORYAN, Team Leader for Climate and Disaster Resilience at UNDP Istanbul Regional Hub.
“Ukraine has been actively contributing to tackling climate change and was among the first countries to ratify the Paris Agreement. The government has worked to develop national climate change policy, resulting in the adoption of a Concept for the implementation of state climate policy by 2030, the development and submission of the low carbon development strategy until 2050, the adoption of an Energy Strategy, and other measures. The international partners’ support, notably, the EU and UNDP, has played a crucial role in these achievements. We welcome the launch of the EU4Climate project, which will build on what has been achieved to date in climate policy, but which will also address the emerging need to develop a climate change adaptation strategy in Ukraine,” said Mykola KUZIO, Deputy Minister of Ecology and Natural Resources of Ukraine.
EU4Climate is based on experience gained during previous (notably the Clima East programme) and on-going projects, partnerships and initiatives, as well as on EU and UNDP expertise at both the regional and country levels in climate policy development and governance. This new project will enable the participating countries to apply various climate change mitigation and adaptation measures so as to achieve greenhouse gas (GHG) emission reductions and deal more effectively with the effects of climate change.

Background information: The EU4Climate Project is funded by the European Union and implemented by the United Nations Development Programme (UNDP). The project will run from 2019 to 2022 with a total budget of EUR 8.8 million and will help the six Eastern Partner countries to develop and implement forward-looking climate policies.
For additional information, please contact Yuliia Samus, UNDP Communications Specialist via yuliia.samus@undp.org, or at +38 097 139 14 75